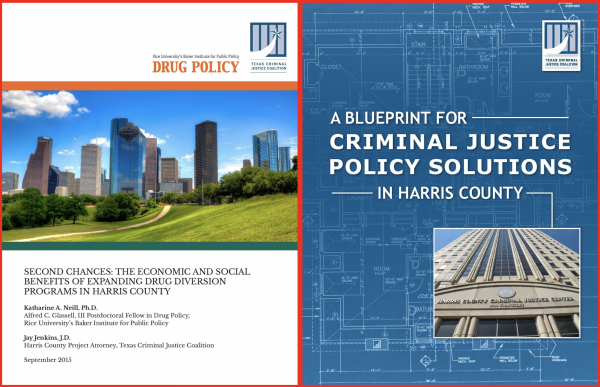 EARLY SUPPORT FOR DIVERSIONS: We have long fought to reduce the Harris County Jail population through advocacy for diversion programs (recommendations issued in 2012) and legislative testimony specific to safely right-sizing the jail’s population (provided to the House County Affairs Committee in 2014).

Furthermore, we have discussed criminalization and over-incarceration of the mentally ill – a significant problem in Harris County – with the United Nations Working Group on Arbitrary Detention.

SUPPORT FOR THE FIRST CHANCE INTERVENTION PROGRAM: In October 2014, then-District Attorney Devon Anderson partnered with certain law enforcement agencies to establish the First Chance Intervention Program (FCIP), a rehabilitative diversion program for people with first-time, Class B misdemeanor marijuana possession offenses. In 2015, TCJE and Rice University’s Baker Institute for Public Policy issued a report examining the FCIP and the potential societal, systemic, and financial benefits that would come with expanding the program to other offenses, including low-level theft and drug possession arrests. The Houston Chronicle followed up with an editorial echoing our arguments and citing our report. In late 2015, the District Attorney extended the FCIP to all law enforcement agencies in Harris County. Also importantly, the DA’s vocal message that marijuana is a low-level, nonviolent offense provided her with the opportunity to expand the program to first-time shoplifting arrests.

RELEASE OF REFORM BLUEPRINT: In 2015, TCJE worked with partners to develop A Blueprint for Criminal Justice Policy Solutions in Harris County, which provides recommendations related to the Criminal Justice Coordinating Council, the bail system, alternatives to incarceration, rehabilitation services, and reentry programs. We officially released it at a town hall event sponsored by the Earl Carl Institute for Legal & Social Policy at the Thurgood Marshall School of Law and the University of Houston Law Center, where we outlined action steps that community members could take to effect change at various points in the system.

Note: This blueprint served as an update to a report issued by the Justice Management Institute in 2009, which offered recommendations for reducing the jail population. Furthermore, the blueprint served as the template for the county’s successful 2016 application to the MacArthur Foundation for a Safety and Justice Challenge grant, which resulted in the county receiving $2 million over three years to reduce its average daily jail population; Jay went on to serve on multiple MacArthur grant-related committees to support Harris County’s efforts.

WORK TO ADDRESS KUSH: In 2017, when the use of synthetic cannabinoids (kush) was making alarming headlines in Houston, we teamed with the Baker Institute to co-author a report recommending decriminalization of kush possession and use, and diversion of individuals to the Houston Recovery Center. Following the report, the City’s use of the Homeless Outreach Team to divert these individuals (a recommendation from the report) helped address the underlying issues of homelessness and substance use in a more humane way. 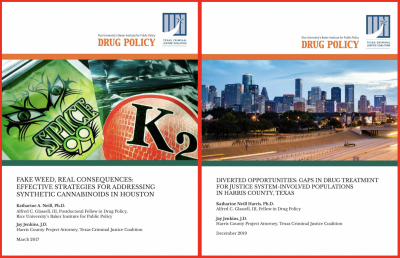 RELEASE OF REPORT ON TREATMENT NEEDS: In 2019, TCJE and the Baker Institute released a report analyzing the availability of substance abuse treatment services in Harris County. Our findings were based in large part on surveys and in-person interviews of treatment providers. We found gaps in care in treatment, insufficient standards of care and limited outcome tracking, and challenges in the county’s ability to effectively connect people charged with drug offenses to drug treatment and other services – both due to insufficient community resources and the inherent inability of the justice system to handle people with unaddressed needs.