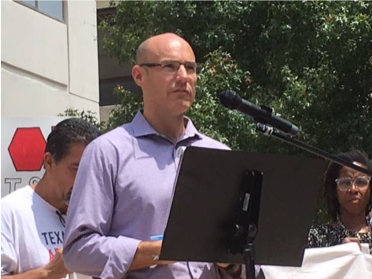 In September 2017, DecarcerateATX members testified at a Travis County budget hearing in opposition to a proposal to build a new women’s jail. Many women in Travis County’s jail are confined for low-level possession offenses and kept for lengthy periods – rather than being offered access to programming in the community, despite many having higher needs. At the hearing, advocates emphasized other ways to address the growing number of females confined in the jail, including through stronger pretrial interventions.

Over the following six months, TCJE and other DecarcerateATX advocates continued to put pressure on county stakeholders to find alternatives to jail construction.

In March 2018, prior to another County Commissioners’ meeting, TCJE attended a press conference organized by Grassroots Leadership, during which Doug Smith called for investments in community-based behavioral health services.

Ultimately, the Commissioner’s Court agreed to pull the funding for jail construction and instead spend a year considering other opportunities to advance the health and safety of community members through diversion and treatment alternatives.

However, in May 2021, an $80 million proposal to build a new women's jail was back on the table – despite the current population of incarcerated women being half what had been projected in the county's planning. TCJE joined advocates in loudly opposing the "trauma informed facility," speaking at a press conference, signing on to a well-backed letter, and engaging in other outreach around the trauma and family separation that accompany a jail sentence. In mid-June, after hours of testimony from approximately 100 people in opposition to the jail, the Travis County Commissioners voted to “pause” for at least a year and convene a diversion-focused working group. This is a significant achievement, driven by system-impacted people, and advocates will now strengthen efforts to educate and mobilize around community-based alternatives to incarceration over the coming year.