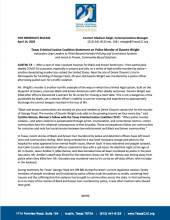 After a year of near-constant traumas for Black and brown Americans—from particularly deadly COVID-19 outcomes, especially in prisons and jails, to a series of high-profile murders by police—another devastating murder has rocked the United States. Near the site of Derek Chauvin’s trial in Minneapolis for his killing of George Floyd, 20-year-old Daunte Wright was murdered by a police officer after being pulled over for a traffic violation.

Read the rest of this press release here.

Many Texans who are released from jail may find themselves behind bars again in the future, but a bill in the state Legislature is hoping to change that. On Friday, state representatives passed House Bill 930, which would create a board to deliver a recidivism report every other year. Filed by DeSoto state Rep. Carl O. Sherman Sr., the bill would detail re-arrest, reconviction and reincarceration rates in the hopes of keeping previously incarcerated Texans from returning to jail.

Read the rest of this article from the Dallas Observer. 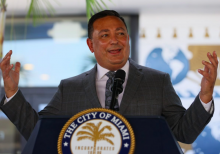 Art Acevedo, Miami’s new chief of police, works hard to project a public image that threads the needle between appearing tough on crime and assuring more liberal members of the public that he takes their concerns about policing seriously. He’s good at it.

Read the rest of this article from The Appeal.

A coalition of immigrants’ rights groups are urging the federal government to speed up the family reunification process, following a tour of the Freeman Coliseum, which currently houses more than 1,800 unaccompanied migrant children. The tour comes after Gov. Greg Abbott held a press conference Wednesday, calling for the facility to shut down operations, alleging instances of sexual abuse taking place, staffing issues and coronavirus safety concerns.

Read the rest of this article from KENS5.

Only one child in federal custody at the Freeman Coliseum has been reunited with his family. The vast majority of the 1,898 children ages 13-17 who remain at the facility have been there long past the five- to seven-day timeline that immigrant rights groups were told to expect before authorities reunited the children with their families.

Read the rest of this article from the San Antonio Report. 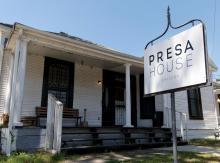 Southtown gallery Presa House will host two events this month that engage a broader cross-section of the city than the typical art world crowd. The first takes place Sunday, April 11, and is the latest in a monthly documentary screening program conducted in partnership with the PBS Indie Lens Pop-Up Virtual series.

Read the rest of this article from the San Antonio Report.

Houston’s Drug Busts Have a Clear Target: People of Color

On Feb. 8, the Houston Police Department (HPD) arrested a homeless man, 57-year-old Israel Iglesias, for allegedly handing an undercover cop 0.6 grams of methamphetamine. Iglesias died the next day in the county jail. Results of his autopsy remain pending. Iglesias’s death has raised obvious questions about what priorities the police  and the Harris County prosecutor’s office have when it comes to solving or preventing crimes: Why, critics have asked, did police find it necessary to execute an undercover drug sting in the middle of the COVID-19 pandemic?

Read the rest of this article from The Appeal.

George Floyd’s loved ones appeared before a state House committee Thursday to support a sweeping police reform bill named for the former Houston resident, who was killed last May when a Minneapolis police officer pinned him to the ground with a knee to the neck for almost nine minutes.

Read the rest of this article from the Houston Chronicle.

Last year, the Texas prison system unwittingly started a controlled experiment. Agency leaders have long blamed prisoners’ friends and families for a constant flow of drugs they say are often smuggled in through visits and greeting cards. To combat this, prison officials in early March set up new rules curtailing prisoner mail. Two weeks later, they shut down visitation to fight the spread of the coronavirus.

Read the rest of this article from the Texas Tribune and the Marshall Project.

Will Dallas ISD be a national ‘game-changer’ by banning school suspensions?

Dallas ISD must stop using school suspensions as the district works to redress racial disparities, a group of local and statewide education advocates demanded Tuesday. Doing so would help keep children on track and position DISD as a national “game-changer” in taking meaningful steps toward policies that underscore the Black Lives Matter movement, advocates said.

Read the rest of this article from the Dallas Morning News.